If you recently invited StudyLion to your server, just follow this step-by-step tutorial to start setting it up!

Note: make sure the StudyLion’s role and the mute role are always all the way to the top, above the study badges and the shop roles!

Use !config help To read an excerpt of this page

Use the !config command to open the configuration menu

event_log: The channel where the bot will send its audit log messages. Very important to set up.\

🆕 alert_channel: If someone closes their DMs, but they should receive an important notification (such as a camera-only room warning) the bot will send it to this channel instead.

To use, create a room and copy its ID (to check IDs you need to activate developer mode in Discord) using the following command:

Set an Admin and a Moderator role, to allow your staff to access the configuration as well, for example:

Don’t forget to join the main server, in the near future, the owner, admins, and moderators of servers who use the bot will automatically get access to the important channels on our main server, so you will stay updated all the time! https://discord.gg/cgeZKncSDj

The rest are as easy as the first one:

unranked_roles: Roles you wish to exclude from the leaderboard. Useful in cases of cheating or when you use music bots that are in the study rooms 24/7.

donator_roles: If you have donors in your server, you can configure their roles using this feature, it will allow you to unlock features only for your donors if you want in the future.

untracked_channels: Voice channels that you don’t want the bot to consider as study channels, therefore their study time in !stats won’t increase when they use these Voice channels.

hourly_reward: Reward given when studying for 1 hour in a study room

hourly_live_bonus: Bonus reward for sharing the screen or turning on the webcam in the study rooms

min_workout_length: The minimal time a user must stay in a workout voice channel in order to get a workout bonus

workout_reward: The reward a user gets for completing a workout

workout_channels: Set voice channels to be considered as workout channels

task_limit: How many tasks can one have at the same time?

task_reward: The reward a user gets for each completion of a task

task_reward_limit: How many times per 24 hours can a user get the reward bonus

rent_category: sets the category where the private study rooms will be created under.

rent_member_limit: How many users are allowed to join a private study room

rent_price: The price you have to pay if you want to rent a study room for 24 hours

🆕 mod_log: The channel where the bot logs tickets, warning and more. This channel should only be visible to the Admins and moderators.

🆕 studyban_role: This role to someone by the bot when they aren’t following the server’s rules or joining camera-only rooms multiple time without turning on their webcam.

🆕 studyban_durations: The duration of the bans (the amount of time the user will get the “mute” role) after joining the camera-only rooms without opening their camera.

🆕 video_channels: The voice channels you want to set as camera-only (When creating them, make sure to add the “mute” role in the permissions, so the users won’t be able to connect to these VCs if they are study-banned)

🆕 video_grace_period: How long a user will have to open their webcam after joining a camera-only study room

accountability_price: How much does it cost to schedule a session?

accountability_reward: The reward a user will get for attending.

This feature allows you to create and manage the roles your users will get for studying X hours in your study rooms. You can fully configure when and what role they will get.

Here is an example of the roles hierarchy on my server 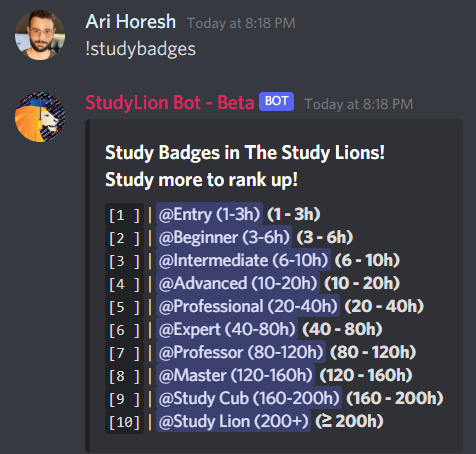 If you run the command !help [command], you can learn more about a specific command, in our example, I used !help studybadges: 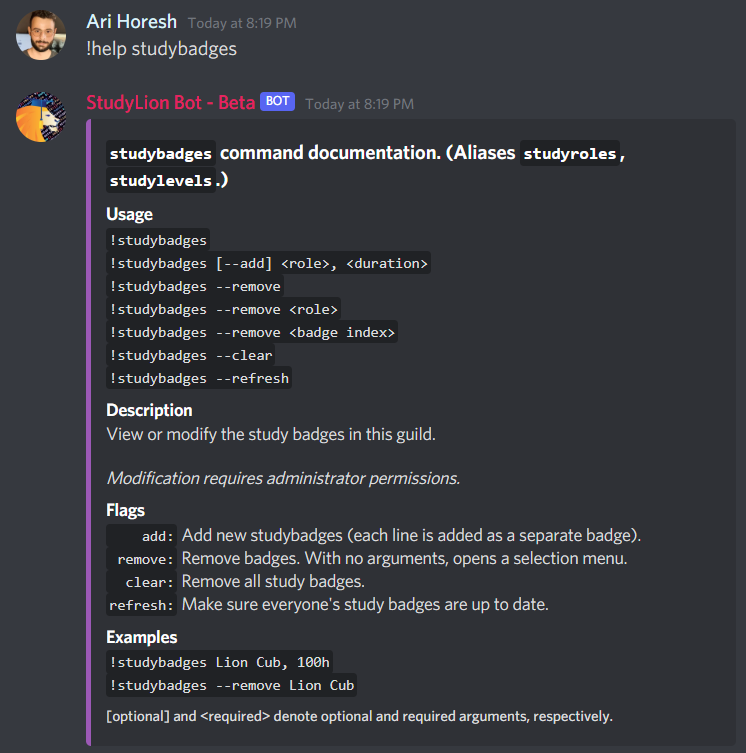 In order to create a role, I need to use !studybadge -add [name of the role], [time]. You can even add multiple roles and just separate them into different lines, like so: 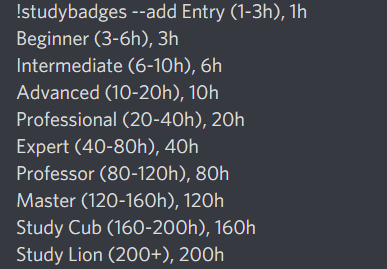 This command will create a set of roles that is similar to mine. You can change the names and the time, but the concept is the same for the creating of the roles. Don’t forget to change the colors, sequence, and display the role in your member list.

The next thing would be to set up your !shop. The shop allows you to set up colored roles the users can buy using their coins. (You will have to change the color in the Role’s page, but use the command to set everything up) 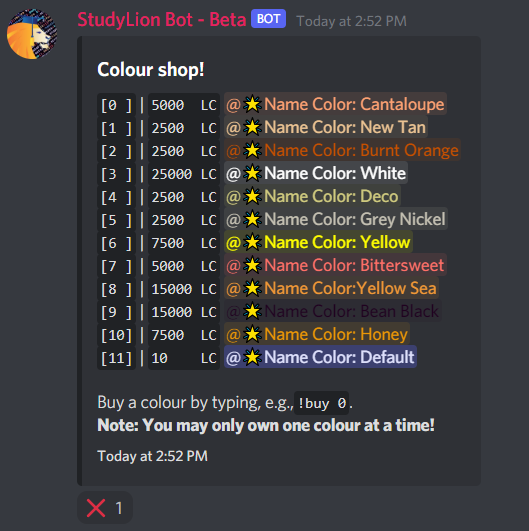 You can do it quite easily using a similar command to what we already did for the study badges: 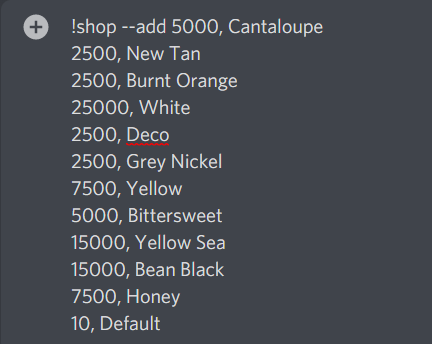 This is pretty much it for the configuration, we will create a guide on how to use the bot as a user in the next few days.

First of all, we need to make sure we set the “mute” role in the correct way, if you want to block study-banned users from joining all VCs, follow the following steps:

If you do want the study-banned users to be able to join other voice channels, but not the camera only channel, create a mute role in the same way but don’t disable the “connect” from the general permissions settings, do this instead: